What happened on
10 December? 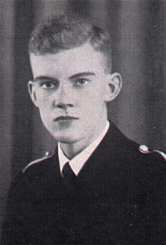 
Daily positions, sinkings and allied attacks during the patrol of U-198

We have daily positions for all 200 days on this patrol.

Ships hit by U-198 during this patrol

5 Jun 1943. U-198 took the Chief Engineer prisoner after sinking the British merchantman Dumra in the Indian Ocean.

Attacks on U-198 during this patrol

5 Apr 1943
18.10 hrs, NE of the Cape Verde Islands: a British Sunderland flying boat (RAF Sqn 204/H) dropped eight bombs on U-198, one of which hit the stern, but bounced off without detonating.
At 20.40 hrs, the same Sunderland dropped four more bombs on the boat, again without causing damage. (Sources: Rohwer/Ritschel)

19 May 1943
20.58 hrs: a British Catalina flying boat (RAF Sqn 262/J) dropped five bombs on the boat. No damage. The aircraft was damaged by flak and had to return to base on one engine. (Sources: Rohwer/Ritschel)

31 May 1943
A corvette escorting a small but well escorted convoy in the Indian Ocean attacked the boat and drove it very deep. No serious damage. At 19.43 hrs the boat fired at an approaching British Catalina (RAF Sqn 262/C) flying boat and then escaped by crash-diving, but subsequently lost the convoy. (Sources: Rohwer/Ritschel)