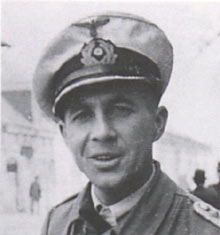 23 May 1940
For the second day in a row, the outbound boat encountered an enemy submarine in the North Sea. This time a torpedo track was seen passing the bow at a distance of about 50m (55 yards).

31 May 1940
After a successful attack on convoy HGF 31 in the English Channel west of Guernsey, the boat endured an attack of four hours during which 34 depth charges were dropped. On going to periscope depth at 22.00 hrs, an armed trawler attacked again, dropping seven depth charges which caused moderate damage. (Sources: Ritschel)

3 Sep 1940
While U-101 was searching for a convoy west of Ireland, an escort launched a series of depth charges over five runs, causing moderate damage, and flooding that the crew were able to control. (Sources: Ritschel)

19 Oct 1940
Despite being shelled by an armed freighter, U-101 completed the launch of torpedoes in a final attack on convoy SC 7 north of Ireland. The shells missed, landing astern as U-101 was turning away and zig-zagging. (Sources: Ritschel)

29 Jan 1941
04.16 hrs, North Atlantic west of Ireland: gunfire from a destroyer forced U-101 to dive as she was attempting to attack convoy SC 19. Three depth charges launched subsequently caused no damage. (Sources: Ritschel)

23 Apr 1941
The boat encountered a British submarine in the North Atlantic, which fired two torpedoes, but both missed.

24 Aug 1941
09.53 hrs, near Rockall: an unidentified aircraft dropped two depth charges. No damage from this attack, but U-101 was subsequently forced to dive to evade aircraft operating in the area on five other occasions over the 24th-25th of August. (Sources: Ritschel)

28 Aug 1941
03.03 hrs, North Atlantic, west of Ireland: the boat was forced to dive by a destroyer while operating against convoy OS 4. Several escorts then dropped a total of 30 depth charges on the boat during a series of attacks that lasted three hours. The attacks were accurate, but the only serious damage was a disabled periscope. (Sources: Ritschel)

12 recorded attacks on this boat.