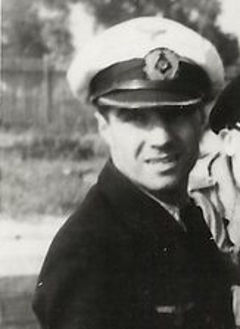 24 Aug 1942
After reporting the position of convoy ONS 122 in the late evening of 23 August, the boat was located by HF/DF and hunted by HNoMS Potentilla and HMS Viscount. At 00.15 hours on 24 August, corvette HNoMS Potentilla picked up U-705 on radar and forced her to dive with AA gunfire after illuminating the area with star shells. She then dropped four depth charges, which were followed by five from HMS Viscount and ten from HNoMS Potentilla, dropped over two runs. After an hour of this, both escorts located U-135 on radar in the same area and forced her to dive. Over the next two hours 57 depth charges were dropped on both U-boats, the final attack being made by HMS Viscount using a new weapon, the Hedgehog launcher. U-705 was damaged and with her stern tube out of action. (Sources: ADM reports, KTB U-705)

25 Aug 1942
At 05.24 hrs HMS Viscount sighted a surfaced U-boat following convoy ONS 122 in fog, which dived immediately. Five depth charges were launched over two runs until contact was lost at 05.53 hrs. A box search was then carried out, which produced a radar contact at 06.09 hrs, a U-boat being sighted two minutes later, which was assumed to be the same one. It was in fact U-176, while the first was probably U-705. (Sources: ADM reports)

Unlike many other U-boats, which during their service lost men due to accidents and various other causes, U-705 did not suffer any casualties (we know of) until the time of her loss.