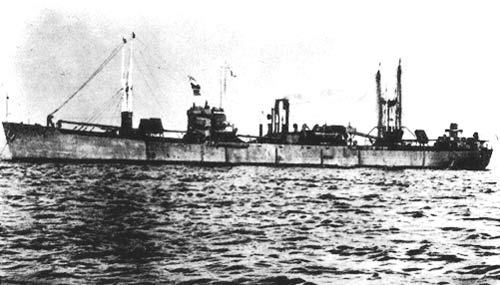 Information on the North Sands class:

The Fort ships were a class of 198 cargo ships built in Canada during World War II. They were for use by the United Kingdom under Lend-Lease system. All had the prefix "Fort" when built during 1941 and 1945. The ships were in service between 1942 and 1985.

The Fort ships were 424 feet 6 inches (129.39 m) long with a beam of 57 feet (17.37 m). They were assessed at 7,130 GRT. The ships were of three types, the North Sands type, which were of riveted construction, and the Canadian and Victory types, which were of welded construction. They were built by eighteen different Canadian shipyards (Wikipedia).

Below are the merchant vessels of the North Sands class:
You can click on any of the header below to sort by that header.

Legend:
(d.) means the ship was damaged in the action.

If you miss a certain ship from this listing please let us know, we probably just mislabeled her class.