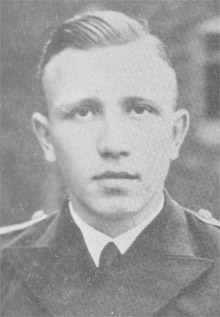 The sinking of U-131 0925hrs, west of Rabat, Morocco: while shadowing convoy HG-76 the boat was sighted and forced to dive by a Martlet fighter of the British escort carrier HMS Audacity. HMS Stork (Cdr F.J. "Johnnie" Walker) immediately raced to the spot together with four other escorts. About one hour later, HMS Stanley got an asdic contact and HMS Pentstemon carried out several depth charge attacks on U-131, causing serious damage and forcing her to surface due to chlorine gas from the batteries at 1247hrs. Unable to dive, Baumann tried to escape at full speed on the surface. After 20 minutes, a Martlet strafed the boat, but was brought down by flak and crashed into the sea, killing the pilot. In the meantime the escorts began shelling U-131 from a distance of about 7 nautical miles, scoring several hits as they closed in. The boat returned fire at HMS Blankney, but without scoring any hits, and was eventually scuttled by the crew at 1330hrs.

This was the first aircraft shot down by a U-boat in the war.

* Just minutes before being sunk U-131 shot down a British Martlet aircraft.

Unlike many other U-boats, which during their service lost men due to accidents and various other causes, U-131 did not suffer any casualties (we know of) until the time of her loss.