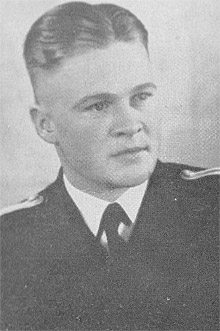 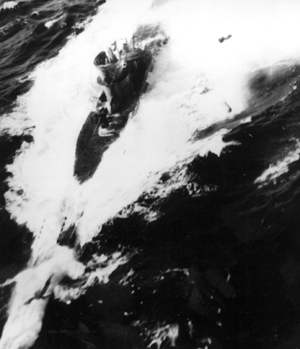 USS Bogue's first victim: Lt. Chamberlain's attack on U-569 as viewed from the rear of his aircraft. Note falling depth charges. Another Avenger aircraft finished the kill. 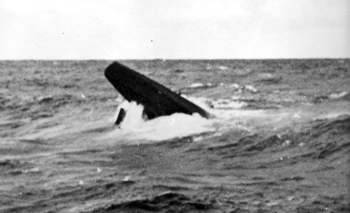 U-569 is sinking, as viewed from the HMCS St. Laurent.

16 Dec 1941
The boat was damaged so badly in an attack by a Swordfish aircraft in mid Atlantic that she had to return to France for repairs instead of continuing to the Mediterranean. (Sources: Blair, vol 1, page 402)

25 Aug 1942
At 11.10 hrs HNoMS Potentilla obtained a radar contact when returning to convoy ONS 122 which was initially thought to be a merchant ship, but while circling it in bad visibility the hydrophone operator reported that the contact was definitely a U-boat. While the corvette headed at full speed towards it the fog lifted and U-569 was sighted directly ahead. The commander intended to ram the U-boat but the gunners of the 4in gun opened fire without orders and lost the element of surprise. No hits were observed from the five 4in rounds fired, but shells from the 20mm AA guns were seen to hit U-569, which crash-dived immediately. The corvette dropped her last three light depth charges ahead of the swirl and swept the area without Asdic contact until returning to the convoy about 13.00 hrs. The U-boat had dived to 130m and was not damaged by the depth charges, but on surfacing more than five hours later several cannon hits were found on the conning tower. (Sources: ADM reports, KTB U-569)

23 Feb 1943
Depth charges from the escorts of convoy UC 1 caused so much damage that the boat was forced to return to France. Date is approximate. (Sources: Blair, vol 2, page 198)

Unlike many other U-boats, which during their service lost men due to accidents and various other causes, U-569 did not suffer any casualties (we know of) until the time of her loss.