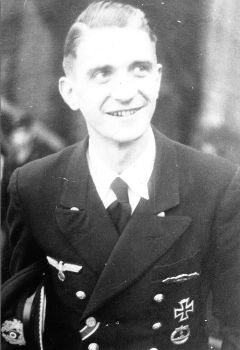 On 6 May, 1945 at 07.50hrs, U-3503 entered Swedish waters west of Gothenburg. The commander, Oberleutnant zur see Hugo Deiring, reported a defective exhaust valve and rudder engine, and that some crew members had become poisoned by the fumes. On 7 May the Swedish authorities ordered Deiring to transfer the U-boat shallower water north of the inlet to Gothenburg harbor.

On 8 May at 17.22hrs, Deiring reported that his ship was sinking. The ballast tank flood valves had been opened! Attempts made by the Swedish Navy to tow the U-boat were not well-received by the German crew, who threw the tow cable overboard. At 19.50hrs, the entire crew abandoned the U-boat and was picked up by the Swedish Navy. At 19.55, the U-3503 sank at a depth of 15 meters.

Between 14 May and 27 August 1946, the Swedish Navy utilized U-3503 as a means of training divers to raise sunken submarines. The navy concluded that it would be possible to lift the U-boat by blowing air into it. At one point up to three Swedish submarine boats and a compressor were used to provide sufficient air to life the U-boat.

On 24 August at 18.56 hours the U-3503 broke surface for the eighth time and this time in proper trim (earlier attempts had ended with either stern or bow coming up before plunging back in the water).

On Tuesday 27 August, the U-3503 was towed into dry dock at Götaverken in Gothenburg. Later in the day, the U-boat crashed into the dock and came to rest with a 60-70 degree list. The Swedish authorities studied the U-3503 thoroughly before she was finally scrapped at Marinens varv (Nya Varvet) [The Navy Shipyard - The New Shipyard].

Unlike many other U-boats, which during their service lost men due to accidents and various other causes, U-3503 did not suffer any casualties (we know of) until the time of her loss.