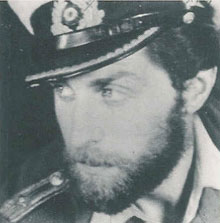 27 Jan 1943
The boat had to break off her one-day old patrol in the North Atlantic after some of the crew were wounded in an air attack.

The boat was outbound for a special mission code-named "Elster" to take on German Naval officers who escaped from a POW camp at North Point on Prince Edward Island, Canada.

Was the boat sunk at Prince Edward Island?
Serious research strongly indicates that this boat was sunk while outbound in the Bay of Biscay. There are many who believe she was sunk on 7 May, 1943 off Prince Edward Island and is there in very shallow waters, regularly snagging nets of local fishing vessels. The boat failed to sent the mandatory radio signal to report that she had successfully left the Bay of Biscay and must therefore be assumed lost in the Bay to unknown causes.

27 Jan 1943
The boat had to break off her one-day old patrol in the North Atlantic after some of the crew were wounded in an air attack.

31 Jan 1943
U-376 left Bergen, Norway on 30 Jan. for her 6th patrol, only to return at 0057 hrs on the 31st after the the 3rd Watch Officer was lost overboard. After collecting his replacement she sailed again the same day. [Obersteuermann Heinz Richter]