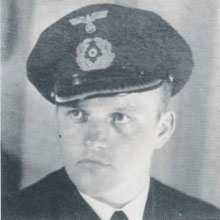 29 Apr 1945
During an attack on convoy RA 66 U-427 attempted to torpedo two of the escorts, Canadian destroyers HMCS Haida and Iroquois. The escorts then dropped a total of 260 depth charges [per U-427 war diary] on U-427's supposed position over several hours. Through good luck and no doubt equal skill the U-boat escaped. This is believed to have been the penultimate attack on an Arctic convoy. Some sources give the tally of depth charges as 678, which we have been unable to verify.

4 May 1945
While taking part in the last convoy attack of the war the boat was severely damaged by escorts and, unable to dive, was escorted by U-968 and U-481 to Kirkenes, Norway, arriving on 8 May. (Date is approximate) (Sources: Blair, vol 2, page 681)

This boat was fitted with a Schnorchel underwater-breathing apparatus in March 1945.

Unlike many other U-boats, which during their service lost men due to accidents and various other causes, U-427 did not suffer any casualties (we know of) until the time of her loss.