What happened on
30 July? 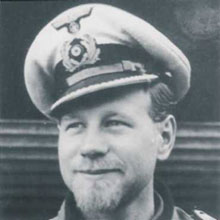 This boat was fitted with a Schnorchel underwater-breathing apparatus in February 1945.