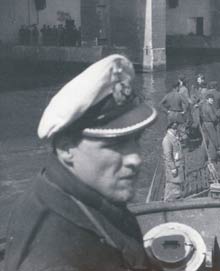 The boat was located by SC137 10cm radar which the Germans could not detect. About 15 men were seen in the water after the boat broke in two. The attacking pilot dropped a liferaft and a smoke flare to assist the survivors. 6 men were picked up from the sea by a British destroyer on 15 July, 3 days after the sinking.

11 May 1942
A US Navy Catalina flying boat attacked some 200 miles SSW of its base at Pensacola. Minor damage. (Sources: Ragnar J. Ragnarsson)

17 Sep 1942
An American B-24 Liberator piloted by James D. Harden attacked U-506 - carrying 151 survivors from the Laconia, 142 of whom were on deck - but the boat dived and escaped unharmed. Harden had also attacked U-156 the day before. These attacks resulted in Dönitz's Laconia Order. (Sources: Blair, vol 2, page 64.)

15 Sep 1942. U-506 (together with U-156 and U-507 and the Italian submarine Cappellini) took part in the rescue operations after the sinking of Laconia in September 1942 off Africa. About 1,500 men were saved by these boats and by French ships from Dakar (which arrived on 16 Sept, four days after the sinking).

Unlike many other U-boats, which during their service lost men due to accidents and various other causes, U-506 did not suffer any casualties (we know of) until the time of her loss.