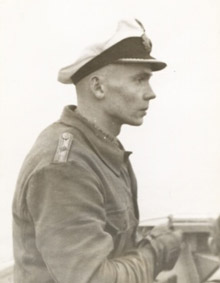 * U-66 was on her 10th Patrol when she was attacked on 3 Aug, 1943 by aircraft from the US escort carrier USS Card. The II WO was killed and the Commander, the I WO and 7 other men were wounded. On 7 Aug, 1943 they met the oil supply U-boat U-117 and the WO Oblt. Frerks from that boat took over the command. Immediately afterwards the U-117 was sunk with all hands, U-66 was still along its side at the time of the attack but managed to escape.

U-66 was hunted by aircraft and surface escorts of the escort carrier USS Block Island from May 1. Several attacks were made, including 3 Fido homing torpedoes that were dropped on the boat. Finally on the morning of the 6th U-66 was seen by the destroyer escort USS Buckley. After exchange of gunfire the escort rammed the boat at 0329 and many Germans climbed on the escort's forecastle. The Americans believed they were being boarded as some Germans carried small arms and a small brawl ensued. The escort backed away from the U-boat leaving 5 armed Germans on the escort who were promptly subdued and taken below. The U-boat started to draw ahead but then turned and hit the escort near its engine room and for the second time the boat was raked with gunfire. The boat then finally sank after a final salvo from the escort's 3in gun after one of the longest fights in the war.

More information about the hunt and sinking of U-66, including photos of the air attacks and other original documents can be found on our partner website uboatarchive.net: U 66 sunk by USS Buckley on 6 May 1944

10 Nov 1942
20.50 hrs, outbound, Bay of Biscay: after diving following warning of incoming radar signals from the FuMB, a leak through a ventilation valve that was was left open caused a fire in one of the control panels, and U-66 was forced to surface due to chlorine gas when the water reached a battery. At 21.20 hrs, a Wellington Mk.VIII (RAF Sqdn 172/D, pilot F/O D.E. Dixon, RAF) located her on ASV radar and attacked from the port quarter after illuminating the U-boat with the Leigh Light, dropping four 250lb depth charges across the bow and firing 100 rounds from the tail guns. U-66 claimed several AA hits, but the rounds were observed to detonate above the aircraft by its crew. They also observed the U-boat stop for 15 minutes after describing a half circle close to marker flares dropped in the attack. The explosions had lifted U-66 over a metre out of the water, unseating an air compressor and disabling the port electric motor and the rudder. The aircraft had no depth charges left and could only circle the boat until forced to return to base at 23.22 hrs. The severe damage forced the U-boat to abandon the patrol, reaching Lorient the next day under escort from Ju88 long range fighters and armed trawlers. (Sources: KTB U-66, ADM 199/1783)

3 Aug 1943
21.35 hrs, mid Atlantic: the boat was surprised by a Avenger/Wildcat team (VC-1 USN) from USS Card. The aircraft made several strafing runs and one depth charge apparently exploded directly under the boat. The II.WO, Oblt Kurt Schütze, and Mtrgfr Erich Lorenz were killed and MechGfr Heinz Nitsch died of wounds during the night. The commander and FzS Pfaff were seriously wounded and the I.WO and five ratings were slightly wounded. U-117 was ordered to meet U-66 three days later for medical assistance and to transfer a replacement WO. (Sources: Ritschel)

21 Mar 1944
British patrol boats attacked U-66 after she sank the British tanker Matadian. The boat bottomed on the muddy seabed before escaping. (Sources: Blair, vol 2, page 546)

U-66 was one of the five boats that started Operation Drumbeat in Jan, 1942.

3 Aug 1943
21.35 hrs, mid Atlantic: the boat was surprised by a Avenger/Wildcat team (VC-1 USN) from USS Card. The aircraft made several strafing runs and one depth charge apparently exploded directly under the boat. The II.WO, Oblt Kurt Schütze, and Mtrgfr Erich Lorenz were killed and MechGfr Heinz Nitsch died of wounds during the night. The commander and FzS Pfaff were seriously wounded and the I.WO and five ratings were slightly wounded. U-117 was ordered to meet U-66 three days later for medical assistance and to transfer a replacement WO.

There was another U-66 in World War One
That boat was launched from its shipyard on 22 Apr 1915 and commissioned into the Imperial Navy on 23 Jul 1915. The Naval war in WWI was brought to an end with the Armistice signed on 11 Nov, 1918. Read about SM U 66 during WWI.