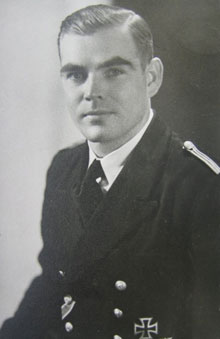 21 Jul 1944
00:19 hrs, Norwegian Sea: a B-24 Liberator (59 Sqn RAF/Z, pilot SL B.A. Sisson, DFC) located U-995 on radar while on A/S patrol. The aircraft was forced to take evasive action by intense and very accurate flak while the nose, beam and tail gunners returned fire. The U-boat dived as the Liberator turned away to a distance of approx. one mile (1.6 km). The aircraft then dropped six depth charges 30 yards ahead of the swirl about 10 seconds after the U-boat disappeared. A small patch of oil was sighted, but nothing was heard via a sonobuoy pattern that was subsequently dropped. U-995 continued her patrol, but five days later a leak in the mounting of a radio antenna was discovered which forced a return to base, as it restricted diving capability. (Sources: ADM 199/1786)

8 May 1945. When the war came to an end in Norway, U-995 was moored at Trondheim waiting for a Schnorchel to be fitted.