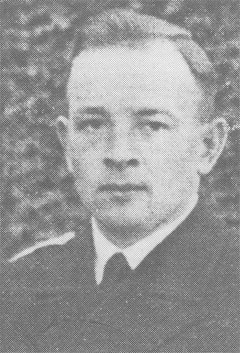 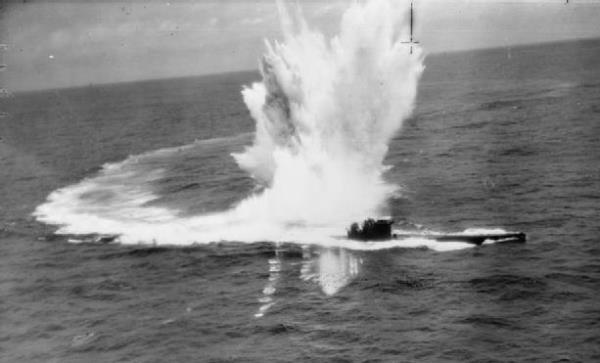 Six depth charges explode by the stern and cripple U-243 which is shortly thereafter abandoned by its crew
when further aircraft arrive at the scene. Photo from Imperial War Museum, C-4603

11 Jun 1944
0205hrs, 90 miles SW of Bergen: the boat opened fire on an aircraft that flew directly over her at low height. It was hit and crashed into the sea after answering the recognition signals too late. The men aboard U-243 realised that they had shot down a German Ju88 aircraft and headed at full speed for the position where the aircraft sank. They found only one survivor from the crew of four, the radio operator. U-1000 joined the rescue operation after observing the downing of the Ju88, but only found a torn up rubber dinghy. The survivor was landed at Bergen on 12 June. (Sources: BdU KTB)

The sinking of U-243: 14.35 hrs, Bay of Biscay SW of Brest: the boat sighted Australian Sunderland flying boat W4030 (RAAF Sqdn 10/H, pilot F/O William B. Tilley) and opened fire at a range of two miles (3km). The Sunderland strafed U-243 with 1,250 rounds, wounding at least three men on the bridge, including the commander, Kptlt Märtens, and silencing the AA guns. Six depth charges were dropped which straddled the stern. The explosions disabled all engines and caused a major leak, causing the stopped U-boat to settle by the stern with a list to port. The aircraft was kept at a distance with flak until the Germans launched dinghies at 15.00 hrs. The abandonment was hastened by the arrival of a second Sunderland from the same squadron and an American Liberator, which both dropped depth charges on the sinking U-boat. F/O Tilley dropped a dinghy and a food pack for the survivors before returning to base. He was awarded an immediate DFC, and the nose gunner, F/Sgt Lance E. Cooke, an immediate DFM. Kptlt Märtens and 38 other survivors were picked up by HMCS Restigouche after 14 hours, but the commander later died of his wounds.


2 recorded attacks on this boat.

Unlike many other U-boats, which during their service lost men due to accidents and various other causes, U-243 did not suffer any casualties (we know of) until the time of her loss.