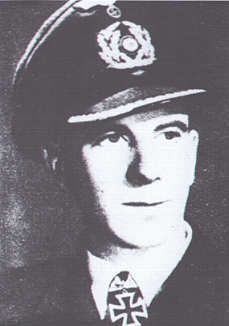 24 Oct 1941
After mounting successful attacks on convoy HG 75 on the morning of this day, U-564 was attacked twice in the evening: an unidentified aircraft dropped one bomb, then three hours later the boat was depth charged by an escort. No damage.

U-564 suffered heavy damage and returned to base escorted by U-185, but was sunk by aircraft the next day.

The sinking of U-564: 14.39 hrs, Bay of Biscay: two inbound U-boats were sighted by the Whitely. U-564 was unable to dive following an air attack the day before and was being escorted back to France by U-185. With fuel running low, the pilot decided to attack at 16.45 hrs and approached U-564. Both boats opened fire and hit the bomber, but its depth charges caused more damage to U-564 and she sank at 17.30 hours. The hydraulics and the starboard engine of the Whitley were damaged, so the crew was forced to ditch, and ended up as German prisoners after being picked up by a French trawler.

The commander and 17 crewmen were picked up by U-185, which transferred them to the German destroyer Z-24 two hours later and then continued her patrol. Canadian Hampden bomber X2961 (415 Sqdn RCAF/S, pilot S/L J.G. Stronach) arrived in the area around the time of the air attack and was shot down by a German Ju88C fighter (15./KG 40, Hptm Hans Morr) with the loss of all four aircrew. (Sources: Franks/Zimmerman/Goss)