What happened on
8 July? 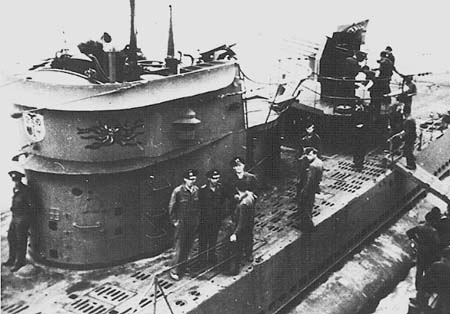 The massive anti-aircraft guns on U-462

The aircraft eventually drove the U-boats submerged and forced them to stay there for extended periods of time thus greatly reducing their operational efficiency.

This strategic victory was not without loss as can be seen in the table here below; more than 120 aircraft and hundreds of men were lost in the fierce battles between the U-boats and their pursuing aircraft. In a number of cases there were no survivors from either the aircraft or the U-boat. You should read more about the famous Fight Back order as it attempts to explain perhaps the most critical phase of the entire battle, the summer of 1943.

This listing does not include the numerous aircraft that were damaged while attacking U-boats.

116 aircraft shot down by 97 individual U-boats for the loss of 31 U-boats either sunk during the attack or due to being located by other forces shortly afterwards and sunk.

One source says that RAF Coastal Command (U-boat hunters) lost 700 aircraft (badly damaged, shot down and paid off - not all to U-boats of course) and sank 220 U-boats during the war. I've been unable to verify the RAF losses but the U-boat figure is about right it seems. These figures show the immense effort put out by the British to hunt down the U-boats and almost all the aircraft successes took place in 1942 and later.

Please note
There may be missing aircraft losses from this page, if you spot any missing or some data that is not 100% accurate please contact me. This page is based on the best available information at this time but mistakes or omissions are possible.